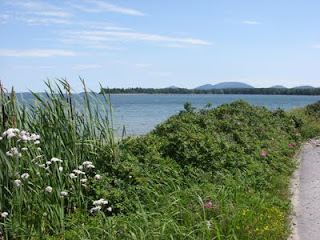 Saturday was a glorious summer day, so we went to a favorite spot that has easy access and an unsurpassable Maine view: Marlboro Beach. That peak in the distance is Cadillac Mountain, where you can see the glint on the cars as they go up and down the mountain on sunny days.

The road in to the beach has been fixed of its cavernous potholes, as I discovered when I checked Thursday on my way home from my grandmother's, which meant we had a destination for a weekend jaunt. 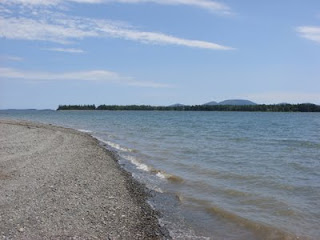 The beach curves out into the water, giving you much more beach than expected. It is fairly rocky in most places and the other places are clam flats, very gooey clam flats.

It was blowing pretty well, which meant the waves were bigger closer to the mouth of the cove, but on the back side of the cove they were much smaller.

Which suited our Kai. He didn't get much beach exposure last year. Our first jaunt didn't go so well last year with Kai pretty scared of everything and overwhelmed with the smells, but this year it was a different story.

He road in the motorhome with my folks and sister and I am told he went bonkers when he smelled the salt air. When I arrived, he'd already been out on a walk and had fun. So after lunch we went again, with the intention of seeing him in the water if at all possible.

He was still a bit overwhelmed, but he was more than willing to explore, and when I went into the water, he figured he could, too. And then he was in and out of the water all on his own, although he went farther if I was in with him. 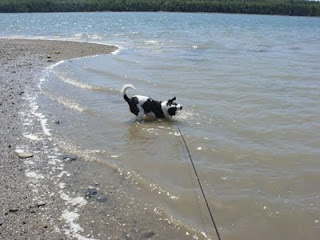 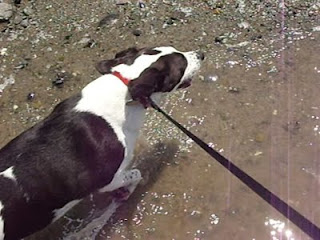 The pictures above were grabbed from the video, and you can see he is doing pretty well.

As we walked back to where the bigger waves were hitting the shore, he did go into the water with us, although with a bit more caution. He even went out far enough to ride one bigger wave as it rolled in, but I think that freaked him out a bit when his feet left the ground. 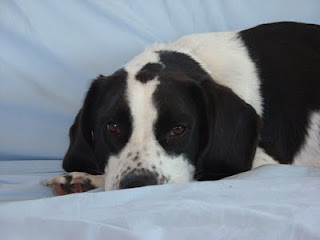 Once I got him toweled off, it was on the couch for Kai. He was very tired and more than ready to leave for home and several long naps before going to bed.

It was a very good day.
Posted by Janine Pineo at 8:21 PM