A Book Well Traveled on an Unexpected Journey 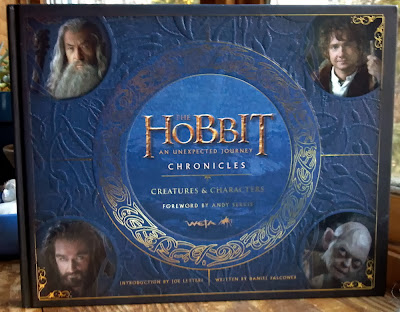 This is dedicated to the very dear Rosemarie Rogers, a Kiwi who makes me laugh and has become one of the dearest people I have yet to meet.

I like to imagine the life of inanimate objects: where they've been and the miles they have traveled, what they've "seen" and who touched them.

It is especially true with books for me: who has held them; whose eyes have looked at their words, and pictures if they have them; if they smelled the scent of pages still new or the musty tingle of pages old.

I vaguely remember the query from Rosemarie Rogers, a Twitter tweep I had gotten to know about the time "The Hobbit: An Unexpected Journey" came out in December 2012. It was early 2013 and she wanted to know if she could get something autographed for anyone during a signing date at Weta.

I settled on the new Hobbit book: "The Hobbit: An Unexpected Journey Chronicles: Creatures and Characters," written by Daniel Falconer, a Weta guy. Rosemarie had gotten Thorin's map for me a few weeks' prior, and Daniel Reeve had signed it (with Elvish, mind you).

Thus began a rather amazing journey of thousands of miles of one not-exactly-small book from New Zealand, with an overnight stop in San Diego for good measure. It was signed by nine Weta folks - kind words of thanks from all - three of whom took a moment and drew a picture as part of their signature.

I have no words to adequately describe how special this book is. So let me tell you about its journey to give you an idea.

The first tweet came through on April 12 (the tweet with photo), when Rosemarie and her equally dear sister Pamela had gone to Weta for the autograph session.


And in what may be one of the funniest coincidences, Eric is a Mainer. He worked in Portland for a TV station before moving to New Zealand years ago where he got his start with Weta on "The Lord of the Rings" movies. Someone told him he was signing for a person in Maine, and I got a nice salutation to a fellow Mainer.

Pamela took a picture of Eric signing my book (the tweet with photo), with Kevin seated beside him. Parked against the books is the adorable world traveler, WoolE the sheep, the Rogers' family travel companion.

Rosemarie said there would be another autograph session in a week. Off she went to that one, dragging the not-exactly-small book to another venue. At that round, three more Weta folks were signing: Jeff Capogreco and Mark Gee, both Weta Digital Digital Effects Supervisors, and Daniel Falconer, the book's author and art director, and a Weta Workshop Concept Artist.

It was at that session that the thoughtful Daniel drew a picture of Sebastian, the fortunate hedgehog living with Radagast. Sebastian is looking quite perky and says: "Feeling much better thank you!"

It was about then that we debated whether Rosemarie should ship me the book. She volunteered to take it with her to San Diego Comic-Con 2013 in July. I didn't want it to be a bother, carting this not-exactly-small book across the Pacific with her.

She insisted it was not a problem unless I didn't want to wait to get my hands on it. I said I would wait. Impatiently, but I would wait.

Plus, being ever practical, we both knew shipping would be much less than if she sent it from New Zealand.

I cannot account for the book's whereabouts in the intervening months. It might have been kicking its heels about Wellington, although far more likely it was getting its foundation all shook up in the many earthquakes that rocked the city (Rosemarie says not so and that it was adoringly cocooned in bouncy bubble wrap, but I will continue to imagine at least a few minor wiggles that everyone brushed off as maybe a high wind). Chalk that up to another adventure I have not experienced either. I am not sure I even want to.

July finally arrived and while I was sweltering through a miserable month, Rosemarie flew to her beloved Comic-Con, toting along the not-exactly-small book in her luggage. She kept me apprised of her activities and finally let me know that she was leaving the book with the folks at the Weta booth.

I am under the impression it spent the night with Daniel Falconer.

(If this is not true, please do not disabuse me of this notion.)


And then I got another tweet on July 21, stating mission accomplished (the tweet with photo). The very next day the book was on its way and arrived in little ol' Maine before week's end.

I was overwhelmed. I knew a little of only a couple of these folks, but all of them worked on something I love, something that speaks to my heart like few tales do in today's world.

I vowed I would write about the journey of this book, but something always got in the way of me getting it done.

Now I know why.

The extended edition of  "The Hobbit: An Unexpected Journey" was released earlier this month. I have only another couple of hours of extras to watch, but it struck me earlier this week as I watched one of the pieces in the Appendices Part 8 that I knew those names. Not just Richard Taylor, but other names.

I went and looked at the book. I wrote down all the names. I then started up "Durin's Folk: Creating the Dwarves" and watched as the names of three of the four at Comic-Con appeared as each person talked about the work they did creating the dwarves.

There was Nick Keller, Weta Workshop Lead Concept Designer, front and center. Nick DREW A DWARF in my book for me.

He drew a dwarf for me.

There was Daniel Falconer again, describing piece after piece of the many parts on which he worked.

Then came Paul Tobin, also a Weta Workshop Concept Artist. I did not know his first name because he signed only his last, but there he was. And in my book, delicately drawn in pencil, is a hobbit for me.

Moments later, Lindsey Crummett, also a Weta Workshop Concept Artist, was onscreen, talking about Durin's folk. She was another signature in my book.

I watched the piece through again and realized I had but one mystery person. It was "abaker."

I started the next part of the appendix and there in "The People and Denizens of Middle-earth" was my ninth signatory: Andrew Baker, Lead Creatures Designer.

Excited does not really describe my happiness at seeing nearly all of the people who signed my book being interviewed. Not because of fame or association or "celebrity."

It is the reason I always sit through the credits in a movie: I like to see the people who do the work behind the scenes, the folks who make the vision possible, the unsung heroes of production. Without them, you would not see what you just saw.

Perhaps it is because that is the role my life has been in work and in private. Nothing just happens. Someone has to do the work, create the vision, pay attention to the details as well as the big picture.

And it makes me happy to see people talk about something they are so passionate about, something that they hold dear. It proves - rather unnecessarily, but nevertheless - that these people want to create a lasting piece of work, especially given the pressure surrounding something as well-loved as a J.R.R. Tolkien work.

I shall have to go back through all of the appendices to see if I can find the other folks who signed my book. Then I can put the face with the name and thank them silently for being so kind.

And here it is: the title page of my book.

In my rummaging through emails and tweets, I discovered a link today that Rosemarie sent me ... a very long time ago. It shows everyone's signature who might be signing at Weta. Yes, they've got it all covered. While this would have been easier (see the Weta signatures here), my path to discovery was long and winding but decidedly more fun.

What a journey that not-so-little book has been on! Very cool!!! :)