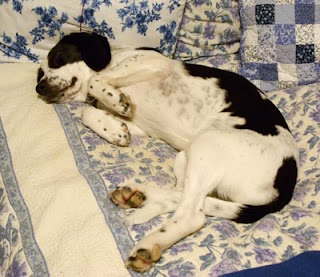 A month ago today we picked up Kai in Freeport. And what a month it has been!

I'm exhausted but very happy with the little guy. He can be a handful, but what puppy isn't? He has learned to play with his passel of toys and elicits a lot of laughter every day as he amuses himself with them. Last night after I got home from work, he was pouncing - like a cat - on his red football as he chased it about the living room. It is one of the most hilarious things to watch as he leaps into the air and lands on whichever toy is his latest quarry. The toy usually flies away because of the impact, which means more running about from Kai. It wears him out, which was good since he slept all evening until I arrived home from work.

After he did that for a while last night, he then commenced rolling over and over across the floor and kicking his legs - while on his back - like a bucking bronco. I have to think he was showing off for his mom because I couldn't stop laughing at him. We haven't seen this much energy - and flexibility - in years.

Whenever we have lapses in behavior (oh, the barking at men is getting better; not soon enough for us, especially if we have dozed off and he goes into a roaring hound bark that shatters the silence and jumps the heart right out of your chest), I keep reminding myself how far he has come in his short life. As a rescue puppy, he didn't have the best start in this world, but our plan is for him to have the best possible life from here onward.

I can't wait to take him to the ocean so he can sniff the sea and the shore to his heart's content (I know his little nose will go crazy with all of the good smells he'll smell). I want to see if he will swim through the waves and romp on the beach. I want to see him dig sandtraps. Maybe he'll even become a clamdigger.

I want to see him roll across the back lawn and frolic about while I plant the garden. I want to teach him fetch when there isn't a couple of feet of snow on the ground, despite the fact he adores diving into the snowbanks and burrowing until just his hind end is sticking out.

I want him to be confident of himself and bravely face the world. I know he can.

Again I want to thank the people who saved this little one to give him this chance. I believe he was meant for me and my family.

Thank you, Margo and Cathy, at the Pickett County Humane Society. And thank you, Ross and Victoria, at Canine Commitment, for winging him straight to us.

Don't forget we have a playdate for this summer, Ross!

XXXX, from Kai to ya'll! Seriously, he would kiss you all to death.
Posted by Janine Pineo at 9:07 PM

Seeing a dog like Kai go to a home like yours just makes our hearts sing! He WAS meant to be with ya'll. He is going to get better and better and be the wonderful dog he was meant to be, thanks to you and your family's loving care and commitment. As a dog foster mom, there is nothing more we can hope for, wish for, or dream about.

I just mentioned to Cathy via e-mail that we had plans to get the boys together this summer. We will be there! We can't wait.