Orange jelly
The mushroom madness has slowed, but there are still many to be found on the daily excursion at the tree farm. I've been watching the orange jelly pictured above expand very slowly on this fallen tree. I like how it looks with the green mossy, lichen-y stuff. Just kind of oozing out of the tree. Like sap. 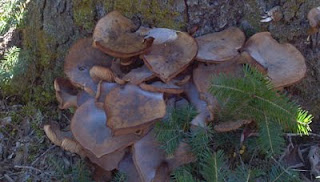 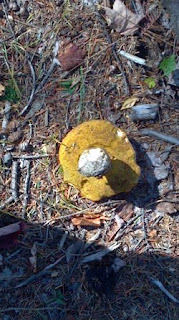 Bolete
I found this a few feet away from the hemlock. This is some sort of bolete, I discovered, because of the looks-like-a-sponge gill area. 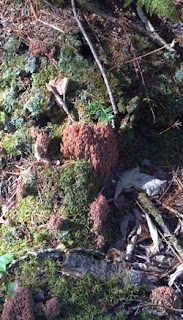 Then there is this cluster of coral mushroom (at least I think they are in the coral class). They have been growing for weeks along the root of this particular tree. The color is interesting and easy to overlook if you just glance because it blends in with the dirt. But there is a lot of it.

As always, remember that many, many mushrooms are deadly. And I have no idea what these ones are.
Posted by Janine Pineo at 9:02 AM

Email ThisBlogThis!Share to TwitterShare to FacebookShare to Pinterest
Labels: Autumn 2011