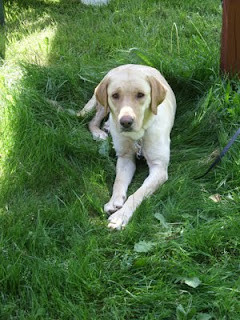 Monday, Poppy was hanging in the backyard while I was planting flowers. She seemed to be enjoying the outdoors, although she could have done without Kai. 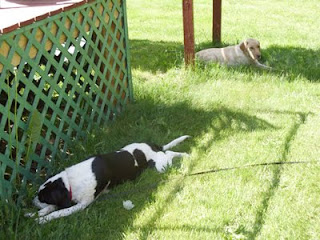 He did his usual thing, which was stretch out in the shade and roll hither and yon. 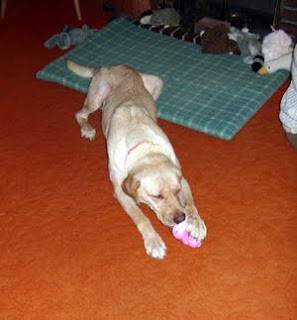 Tuesday night, I brought home some toys for Miss P. to have for her very own. She has found she likes playing with her Kong treat, although she hasn't figured out to toss it around to get the goodies to fly out. She was doing OK with Kai's smaller one, but this one is bigger (more treats!) and is easier for her to hold.

And then we have her romping with toys. She really seems to be having a high old time with Kai's raccoon, but she had as much fun with her new Foxy toy (we just didn't get it on tape).

She reminds me of Kai when he first starting playing hard with toys. I wish they would see they have that in common ...

It didn't work out with Poppy and Kai, breaking our hearts. Poppy was isolating Kai to the point he was curling into a ball on the bed in my room and not leaving while I was at work. A number of things occurred that showed us this wasn't going to work, no matter how much time we allowed or how much we tried to work with the two of them together. Poppy was determined Kai had to go.

I couldn't do that to the boy, who has come so far in 18 months.

The very good news is that now Poppy has a new sister - whom she adores - and our boy is back to normal.

It's OK to be a one-dog household.