More progress - and help from the birthday boy 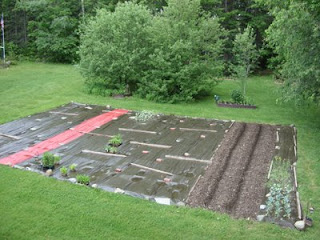 Saturday was a busy day in the garden. I had managed to plant broccoli, cabbage, most of the onions and some of the celery Wednesday, but my hands got so cold that I had to stop.

It rained and rained Thursday, and Friday I never managed to work in the vegetable garden, so that left Saturday before the next rainy day is expected to hit.

Saturday was also Kai's first birthday, at least that's what everyone guessed when he was rescued, and he spent the afternoon "helping" my sister and me when he wasn't sniffing in the lawn, rolling in the grass or chasing bugs. 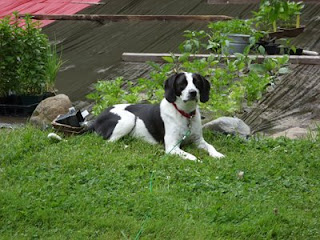 And here he is right in the middle of the potting action for all of the flowers. 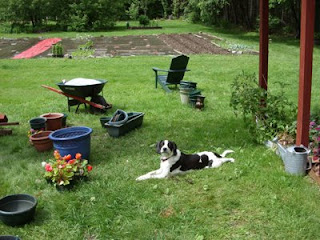 This one just because he looks so sweet. And, yes, he is fully stretched out with his legs extended behind him. He does that all the time, inside and out. 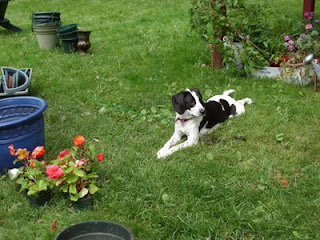 But after a couple of hours of rolling, sniffing and chasing -- and helping, of course -- Kai decided he really wanted a nap. It was a fairly long one, and quite amazing since he was pretty much out in the open. He knew I was in the garden, my sister was potting flowers and my mom was on her scooter, so I guess he felt completely safe. What an incredible boy he is. 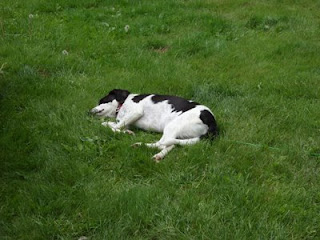 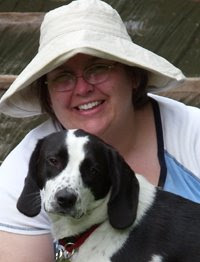 After his nap, Kai and I had a nice snuggle and lots of kisses; he was still so sleepy he just wanted to sit in my lap. 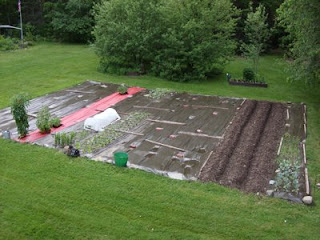 By late afternoon, I had managed to finish planting the celery, the peppers, eggplant, some herbs, the rest of the onions, cantaloupes and watermelon, and a very large tomato plant (that's the treelike thing on the left side of the above picture) that stands more than 5 feet tall now that it is in the ground. The tomato looks out of place right now, but since it has clusters of tomatoes that are already ripening, it can look out of place until the first frost.

If it doesn't rain hard, I may try to get in some of the tomatoes and the giant cucumber plant Sunday morning.

I am sure Kai will be well rested and ready to dig in.
Posted by Janine Pineo at 1:04 AM