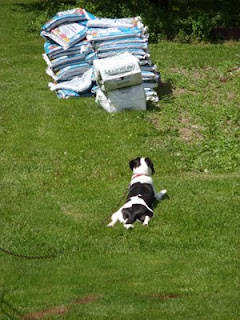 It has been a crazy few days as I tried to get the garden going before we got rain (which is dripping off the eaves as I write).

Kai was a huge help Saturday as he kept an eye on the composted manure. I dumped more than 3,600 pounds of it on the garden in my annual I-am-totally-crazy-and-going-to-pay-for-it-tomorrow tradition. We didn't even get the delivery of the stuff until Saturday morning and by 6 p.m. I had it dumped and raked over the bed. 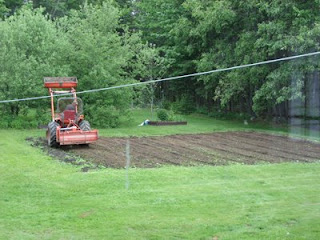 Sunday morning, my faithful plow guy, Steve, showed up and did his thing. It always looks like a work of art by the time he is done mixing it all up.

I, of course, was so sore I think my biceps were crying. Seriously.

I decided to let things settle a bit before laying down the black mulch, so spent the rest of Sunday tucking plants into some of the raised beds: leeks, celeriac, herbs and such. Slowly, oh so slowly, I have to pick away at the three carloads of plants I bought in the past week. With assistance from my sister, we managed to lay down the plastic in under two hours on Monday afternoon. The wind, as usual, was blowing, which makes the job so much more fun. But I was trying to beat the weather, given that the forecast for basically the rest of the week was rainy-ish. They can't seem to make up their minds, but I didn't want to take any chances.

Keeping that thought, I dug my two trenches for my potatoes Monday night, thinking it would be so much easier than doing it after the rain.

Tuesday came, the builders arrived to tear off the back deck, I took Kai to University Forest for a nice walk and then decided to get a few more plants in before the day was done. I had moved two half whiskey barrels, one to make way for Stanley the plum and the other to make way for the new deck. I got those planted, along with two new pots of rhubarb and another seedless Concord grape. The one I planted last year is doing much better than I thought it would.

So it looks like I have two, along with the seeded variety.

Before I picked up for the day, I started sorting vegetable plants and setting them in their appropriate rows. If the rain quits by morning, I should be able to get a number of them in the ground before Wednesday is out.

Do I know how to have fun on vacation or what?
Posted by Janine Pineo at 1:54 AM

Email ThisBlogThis!Share to TwitterShare to FacebookShare to Pinterest
Labels: Spring 2009