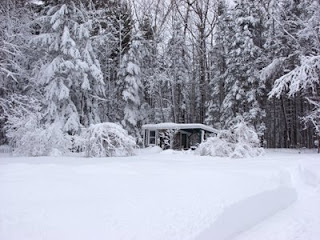 I have reached the breaking point, I swear. This last snow - while all so wondrous in its own disastrous way - was horrid: heavy and wet. My gardening shed, above, looks like a miniature toy when it actually is a large building surrounded by big bushes and even bigger trees. 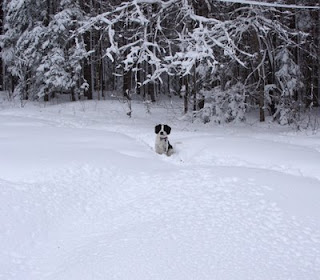 The pooch, sitting pretty in a path, was intimidated by the honking big banks that resulted when my sister used the snowblower to clear a path so we all could maneuver a bit around the back yard. On the well-worn paths, however, he had an easier time and followed his trail on the packed areas. 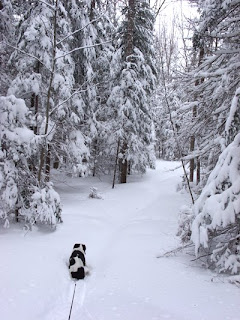 Kai didn't seem to mind breaking trail down through the woods on the path we use to access the snowmobile trail. He and I use that during the week because it is rare anyone is on it midday during the workweek. Despite the depth of the newfallen snow, my intrepid boy scooted right down our path. I was the one to step off it and land hip high in the snow.

Yup, it is that deep.

On our way back to clearer ground, Kai found he had the energy to dig his way back to terra firma.

And then there is this last view of my shed, buried about halfway into the snow mounds. 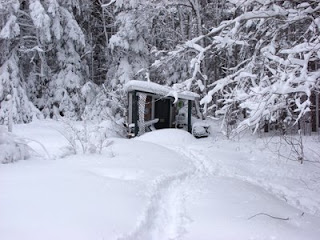