After a year of great losses, we start 2009 with a new addition to the family. 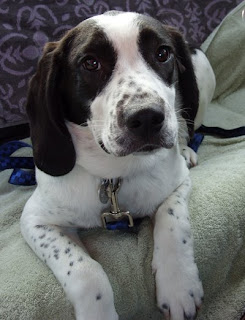 He's a rescue dog, from Tennessee, but he's now a Maine boy. My sister and I picked him up today in Freeport from his dear foster mom, Ross, and her family.

Our boy is skittish because of his start in this world, but he did amazingly well. For the first hour or so in the car, he barely moved, but then he sidled over to the middle of the back seat and before we knew it, he was perched on the armrest between the front seats checking the pair of us out. We ended up having to pull over because we were afraid he had wedged himself in.

We weren't expecting him to be quite so small! Which meant he could slip into holes none of other dogs would have fit in.

After we pried him out, he curled up and dog-napped.

We ended up driving straight to our vet's to pick up his dose of flea preventative and again he did great. (He weighs 34.2 pounds and stood on the scale nicely.)

Pepper was terrific. He was frightened but brave. He stood his ground when other dogs wanted to check him out and he ended up stretched out on the floor of the lobby, keeping an eye on things and trying not to doze off.

As we were leaving, he got to meet his soon-to-be-pal Emma, our vet's dog. They hit it off and Pepper was very interested to meet her and followed her about a bit.

Then it was time for us to head out on the last leg to home.

He had managed to wedge himself into another tight spot for a snooze on the way home and when we arrived, we got him out only to see him hop back into the car. He walked most of the way to the stairs and we carried him the rest of the way. 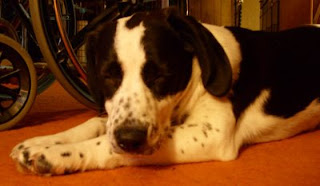 He checked out the first room of the house and stood up on hind legs to look out the picture window. He sat on his new dog bed.

And then he followed us into the house where he met our parents -- his new grandparents.

He's been stretched out in the living room next to my mom. He doesn't mind her wheelchair a bit. And we think he is settling in if these pictures are any sign. 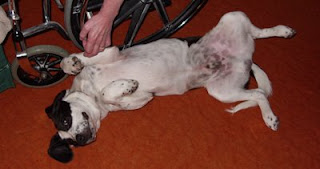 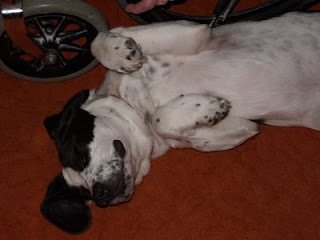 We've had dinner, but Pepper is still checking out the house. He's met two of the cats and that went OK, although someone was making a strange growling noise (I think it was the CAT). And now as I write, he is stretched out under the desk at my feet.

He's had a couple of slurps of water and pieces of a dog treat, but I think he is too tired to do much. He keeps yawning like the puppy he is.

Thanks to Victoria and Ross of Canine Commitment for our new baby boy!
Posted by Janine Pineo at 6:28 PM

Email ThisBlogThis!Share to TwitterShare to FacebookShare to Pinterest
Labels: Pepper

I am so, so happy for all of you AND for Pepper! He looks like he settled in quite nicely, and I'm so pleased. He is a sweet, sweet boy and he deserves a great life.

Jamie (my 5 year old) is sitting next to me, asking me to type "We would like to get together soon." ;-) We will plan something this summer, I hope!

Luke seems to be doing well, too, by the way ... but I did get a bit of a look from him when I walked in the door without his brother!

wonderful news! Pepper, you are one cute boy :)

This is Margo from the Pickett County Humane Society in Byrdstown,Tennessee. I was involved in getting Pepper out of his unfortunate environment, taking him to the vet, and finding temporary foster care for him and his brother. It is heartwarming to know that he is now in a loving home where he will receive the care and attention he so richly deserves. Your blog is awesome! I hope you won't mind if I use some of it for a story in our local paper. The people around here are interested in seeing what happens to the dogs we send "up North".

Margo, thank you for saving Kai and Luke. Please, please use whatever you need from the blog if it will help get the word out. I work at a newspaper myself, so if anyone wants to speak with me, let me know. I also have pictures to share ...