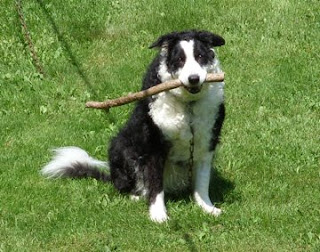 Our Zeb died Christmas Eve morning. His sudden illness was a shock because he had been doing pretty well since Daisy's death in June.

This picture of him is from August. He loved his stick -- named Judy because you couldn't say the word stick in front of him without him getting antsy (his tennis ball was Juanita because of the same problem) -- and could have played for hours if he had had the stamina. But at 12 years old, playtime was pretty brief, but always fun.

We'll miss our boy. But he's with his darling Daisy and that makes it easier somehow.
Posted by Janine Pineo at 6:46 PM

Email ThisBlogThis!Share to TwitterShare to FacebookShare to Pinterest
Labels: Zeb

such a cute boy!