Keeping up with Kai

Kai has been driving me crazy this fall. He can't wait to go for his walk every day and I suffer the consequences if we don't go first thing in the morning.

But I don't really mind because it makes him happy, even if he does get into a bit of trouble, such as running off across the field.

Sunday morning was bright and cool, the colors probably as good as they'll get this year.

While I was taking this picture ... 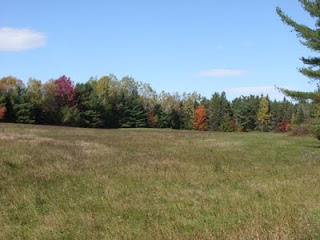 ... Kai immediately hightailed it across the field (that little blob right in front of the shed in the grass is him, naughty boy) so he could sniff. 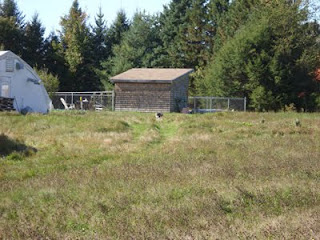 I learned that it does no good to chase him, so I holler and walk off, which I did Sunday. However, I hid just behind a copse of trees to catch him as he came flying after me, since the idea of being left behind doesn't sit well with him. 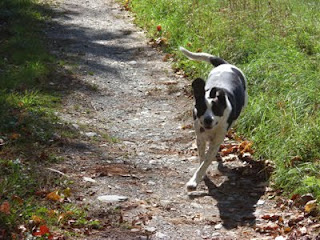 We got past the little copse and he headed out into the field again to do his business before he came flying along. It was a very windy day, by the way.

Then we made our way along the usual route, past the old mill and headed toward the first woodlot. That speck in the road in the shadows is Kai, slowing down because he could hear chainsaws ahead. I also was dawdling. 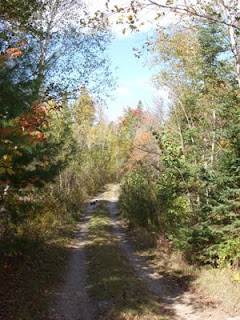 The trees are not quite as vibrant as last year's, but some are still lovely, especially against the blue sky that was so sharp Sunday morning. This one was as I stood in the first woodlot. 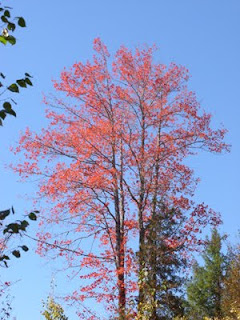 When you get underneath, you see there's more than one. 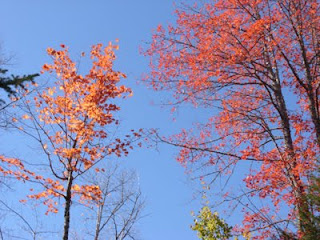 Just a few hundred feet later, and we've reached the second woodlot. This is one of Kai's favorite spots because he loves to run here, usually body-slamming into me. But at this point, he just wanted to keep trucking into the loop. 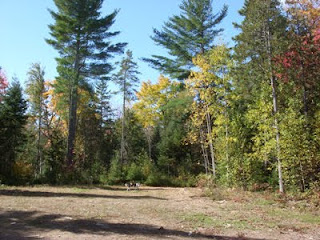 The loop starts here, either going straight ahead and up a hill or to the left and a more gradual ascent. 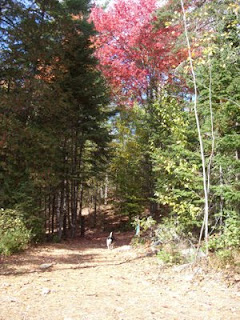 As you can see, he is not waiting for anyone this day. Well, actually he did mosey on back because I was still dawdling and he had to come see what I was doing. 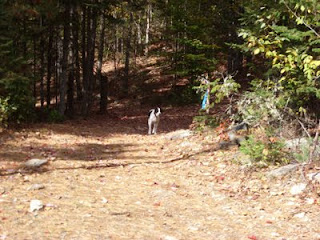 Then we headed into the loop, where right at the start I was greeted with the shades of autumn, from green to yellow to orange to red, all in one shot, side by side. At the bottom of the loop was this view of yet another maple in full color. I liked the dead trunk at the left. 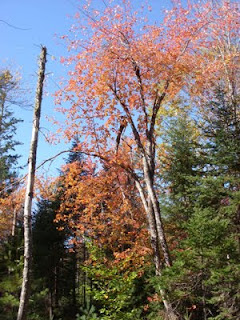 Then we start back toward the woodlot along the backside of the loop. Right now there are spots that are lined with leaves, such as this one. That little hint of white in the top right of the photo is our boy. 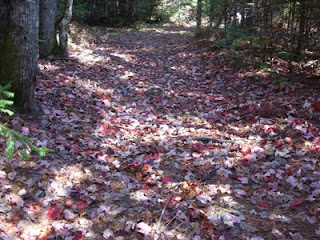 And as we go along, there are these little nooks of light to warm us. 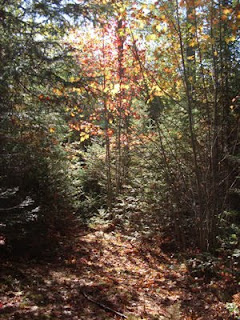 Before we know it, we are back at the big woodlot. And Kai gets his chance to run. Note the very lovely figure eight he does, a most common occurrence for him.

In case you want a screen shot, here's one - look at him go. 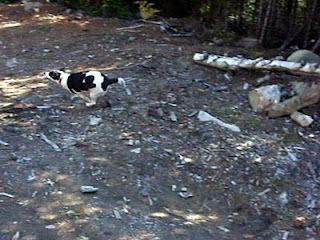 And here's the other. What form. 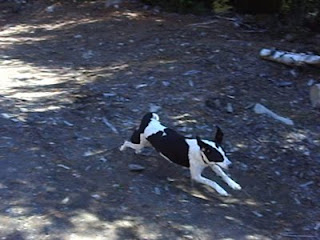