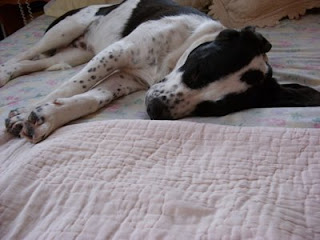 The new baby is getting more comfortable as the days progress. Friday was his two-week anniversary with us and it is amazing - and heartening - to see how confident he is growing.

Kai, which rhymes with pie by the way, has met a lot of new people and been to a number of new places (the vet's, the post office, the town office, the drive-thru at the bank and Dunkin Donuts, and a few hours in my office at work). He's had a play date with a golden retriever named Cooper and he is making friends with all of our cats (except Millie, but you can't win them all, not at once anyway).

He's becoming acquainted with the different beds in the house (above) and he's learning how to get along on the run (below), although we almost always walk him so he can explore farther afield. 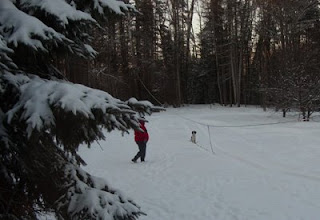 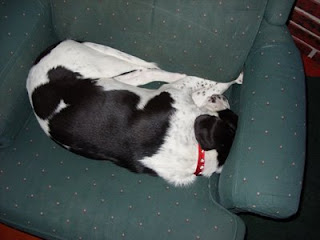 He adores the recliner in the living room, which was Daisy's favorite spot. The shot of him above had me laughing, although not loud enough to wake him up. The silly boy had tucked his feet under the back cushion and slept like that for the longest time.

Kai also sleeps in a legs-extended mode that is so endearing. The picture below shows him tucking his nose into his paw. And he's got his new collar with all of his tags: rabies, license, microchip and just Friday an ID tag with his name and phone number. He was a little scared of losing his old collar, which was the last thing he had from before, but I think he likes the jingle he now makes. Plus he looks pretty sharp in that red with the reflective paw print. 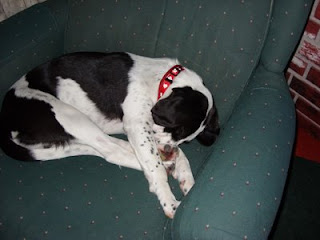 Then we have Kai's toys. He adopted Daisy's bunny his first day and since then, he has accrued a collection of soft plush toys, which seem to be his favorites. I also found a Kong bone for puppies that he adores. The ends hold Dog Treats perfectly and he has pretty much figured out how to chew on it to get most of the pieces out. It satisfies his chewing during the day and keeps him busy for fairly long periods. We are sure he uses more energy chasing it around the living room than he gets out of the two treats.

Below is a picture of Kai with his latest acquisition, Sally the sheep. Her squeaker sounds a bit like a "baaa" and he has gnawed on one of her ears. For the most part, he grabs her and tosses her around, pounces on her and play-bows to her. Sometimes he races across the living room and slides into her, rolling her along as he goes.

Pictured below is the standoff they reached Friday morning. 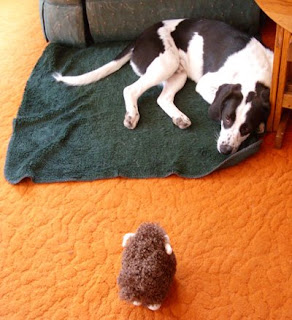 It hasn't been a trouble-free transition, but I never thought it would be. We've had some bathroom issues and he has found his voice when it comes to men, much to the distress of my father. But today I held Kai and let my father reach over and pat him a few times. No barking.

Baby steps. Or puppy ones, if you will.

He and I are making daily progress, too. Kai attached himself to my sister and seemed leery of me, but this week marked the progression from barking at me on occasion to jumping onto the bed with me after his morning constitutional, placing his cold, wet paw on my face and then licking my face until I am wide awake. Kai then snuggles up for another hour or so of sleep.