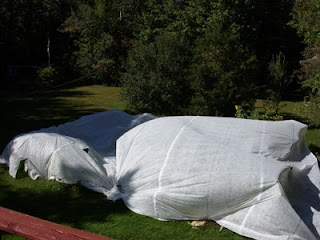 The forecasters say it will likely be frosty overnight, so Thursday afternoon - in the wind, no less - my sister and I wrassled with the giant row covers to tuck in as much as we could.

It is so hard to see the garden go so early, although many years ago when I first started gardening in a large scale, it was usually all over by early September. Only in the past few years have we avoided a frost until later; last year it was late October before things were killed off. By then, of course, most of the plants had died their own natural deaths.

I am not quite sure what the row covers look like, not so much like a blanket, but maybe more like those parachutes we used to play with in gym class. They certainly wanted to take off Thursday in the breeze.
Posted by Janine Pineo at 4:51 AM