What another great American Folk Festival this past weekend. I saw a number of acts and fell in love with one of them.

Friday night, Aug. 23, started with a show by Johnny Hiland (below left), who can play a mean guitar. 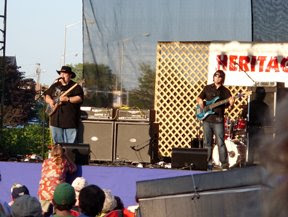 The crowds were huge Friday night, filling the Railroad Stage area after dark (below) when Genticorum was playing. The trio from Quebec was a riot. We saw the end of their show Friday, caught them jamming at the volunteer party late Saturday night for more than an hour with many of the other French Acadian performers and then caught their final show Sunday afternoon (next). My friend Jane and I spoke with them briefly after their last show, thanking them for coming. That's one of the lovely things about the festival: You usually can meet the performers if you want to and they are often spotted throughout the site, taking in the festival themselves. 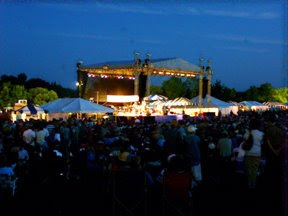 Back to Friday night. We wandered down to the new location for the Dance Stage, catching some zydeco from Jeffery Broussard & the Creole Cowboys (below). 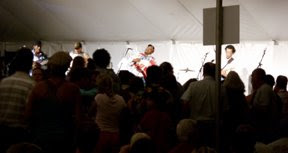 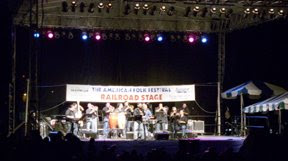 Saturday, Jane and I were volunteers, staffing the information booth across from the Railroad Stage from 10 a.m to 2 p.m. We listened to more zydeco and then the Argentine tango group, Hector Del Curto's Eternal Tango Quartet. After our shift of answering questions and handing out schedules and maps, we got some more great food and then listened to Moroccan Gnawa from Hassan Hakmoun, who was putting on an impressive-in-any-culture display of percussive rhythm.

Another marvel was Benedicte Maurseth, a Hardanger fiddle player and singer of Norwegian descent. Benedicte (below) has a voice of such clarity it will give you chills. And her amazing fiddle only added to her vocals. 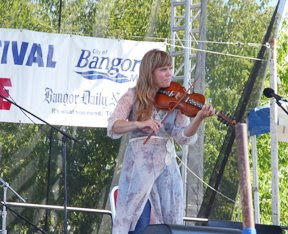 My favorite act, however, had to be the percussive dance. It featured Jason Samuels Smith and Pandit Chitresh Das. The two have a show, India Jazz Suites, that they have been doing for a while and they treated the folk festival folks to a small portion of it. To describe isn't easy, but Jason is a tap dancer and the pandit is a master of North India Kathak dance. The two dance forms have amazing similarities, and watching them side by side brings out more of the subtleties than you would see without the other there.

They were so good, in fact, that we took in two of their performances. The Saturday night one was spellbinding. And then Sunday afternoon, they were back for one more go. Jason (below) is amazing at 27. We spoke with him after each performance, again just to say thanks, and he was a sweetheart, well-spoken and gracious. He said he would love to come back with his jazz trio and the pandit with his musicians to do the full hour and a half show. How we would love for that to happen. 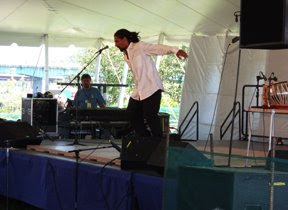 I have a brief clip of their final moments on the Penobscot Stage. I hope you can get the idea.

Email ThisBlogThis!Share to TwitterShare to FacebookShare to Pinterest
Labels: The American Folk Festival