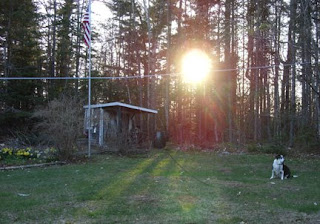 If you go back to the March 2, 2008, posting, you will see a whole lot of snow in a view similar to this one, taken on May 2, a mere two months later.

While the lack of snow is disappointing to Daisy, she has been enjoying the fresh grass.

All I can say is that it is nice to be able to walk around the yard freely, especially without having to don coat, scarf, mittens, boots and earmuffs. Oh, and snowshoes.

And the fact that Daisy is still with us is a blessing, as well. We continue to fight the lymphoma, although the truth is that it is fighting back now and has been since early March. It is breaking our hearts, but it is for moments such as these that make it worth the fight. As long as she is happy, we will soldier on.

I've finally captured some video of Daisy in action; well, as much in action as Daisy ever is. We'll see if I can get it posted shortly.
Posted by Janine Pineo at 5:01 PM