The Book That Flew Right Past Me

I was floating home on a wind chill of -32 degrees Fahrenheit after a second viewing of "The Hobbit: The Desolation of Smaug," thinking of fire and heat and dwarves (not necessarily in that order).

As I blew into my bedroom where it was at least 90 degrees warmer than the wind chill outside, there on the quilt lay a package.

With this on the corner.

My cold hands fought with the tape, but I managed to wrest it open to find this. 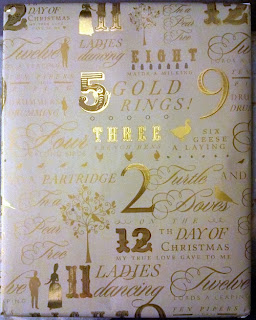 I particularly appreciated the luster of gold on the paper, my eyes falling on the 5 GOLD RINGS! first.

Next were the ladies dancing, but I prefer to interpret that as just one. JUST ONE. (Imagine interpretive dance of one lady. OK, maybe not, unless you want to count my racing around the backyard with the dog in the -32 degree wind chill as an interpretive dance.)

I carefully popped open the taped ends and what should emerge but the latest traveling book, "The Hobbit: The Desolation of Smaug Visual Companion" by Jude Fisher. 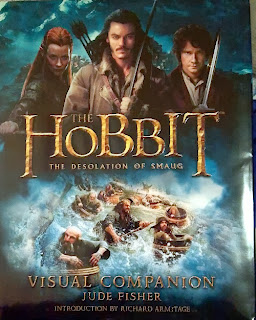 Oh, the places it has gone. Its journey started in London at Waterstones Piccadilly where dear Pamela attended the book signing on Dec. 6 with the author and actors Luke Evans (Bard) and Richard Armitage (Thorin).

I admit, I asked earlier in the week if she might consider getting a book signed. But she demurred, saying getting autographs wasn't her thing. I said no problem. Although I might have asked if she'd tweet a picture of the panel. Just because.

On the 6th, what to my wondering eyes should appear but a tweet to me, with a picture attached, that she had gotten me a surprise. (Read about the big day here.)

I was out walking the dog and nearly fell down in the snow.

And then Pamela went home to New Zealand. I had no idea where the book was since she mentioned maybe having a friend post it from London. I had suggested asking the plane to make a slight detour to Maine and drop it out the door on its way to deliver Pamela back to the land of pohutukawa trees.

It was more than a week later before Pamela let me know she was braving the holiday crowd at the post office to post the book to me.

Yes, this book was on its way back again. As it turns out, it has likely circumnavigated the globe. Pamela returned to NZ via Dubai and Melbourne before she and the book landed on the North Island of New Zealand. After a few days, the book likely left the Southern Hemisphere to fly up the Pacific, crossing the equator before traversing North America on its two-week return journey to me, in the wilds of Maine.


As I opened the cover of the book, I have to admit to feeling a wee thrill chase through me. Pretty sure it wasn't a chill.

And there, with the author's signature (what a dream job for a writer to put together A HOBBIT BOOK), were the signatures of two men I had watched minutes ago on the silver screen. 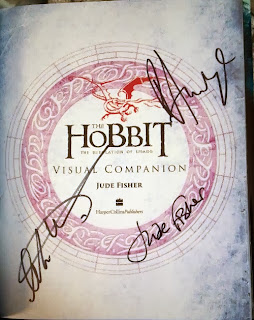 I was blown away by Bard, played by Luke Evans who brings an intensity and urgency (along with a lush accent) that fuels the second installment of "The Hobbit."

Then there was Richard Armitage. I was struck anew by his ability to play subtle to its utmost. His moment of walking inside Erebor, his voice cracking as he sees his home after decades of exile, brought me to tears yet again.

Thousands of miles later, here I stood, book in hand, their signatures before me.

What an incredibly sweet remembrance.

This is another really wonderful story of friendship! Congratulations!

It's a nice memento. I am quite blessed with crazy friends. :D