A Funny Thing Happened on the Way to Erebor 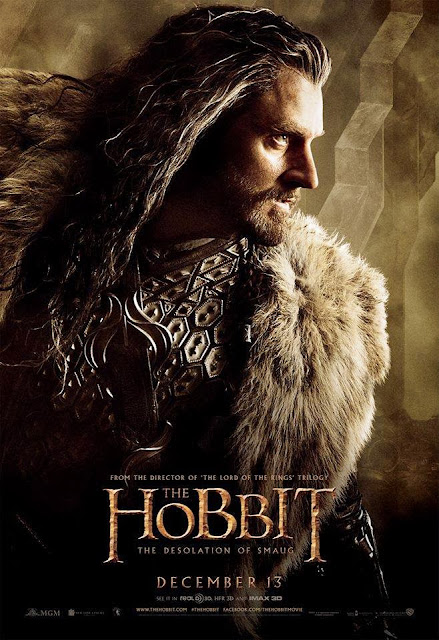 At a few minutes to 5 p.m. EST on Nov. 4, 2013, a bunch of friends and I were waiting around the virtual global campfire for the leader of our company, Peter Jackson.

It was the worldwide Hobbit Fan Event, and my Twitter friends -- many of them incredibly Hobbity with a decided dwarf-king leaning -- had dispersed to theaters around the world.

For more than a week, I watched in amused envy as many of them entered drawings for tickets and many of them won. By the time it was done, I had tweeps in venues around the world: London, New York City, Los Angeles, Wellington and Paris. The first four locations had actors and that genius director making appearances, while Paris was among the major cities with a live stream.

The rest of us had to make do with YouTube.

I watched the tweets from my friends while we waited. I chirped in with my excitement, too, because how often do you get to participate live with thousands of other people around the globe for something fun?

The YouTube countdown was on and then 5 p.m. hit. Nothing happened.

Finally, a shot of Gandalf was up and a Twitter feed was scrolling across the bottom of the screen.

I chuckled as I started to see tweets from my friends roll by.

I bounced back and forth between Twitter and YouTube. I tweeted how happy I was we were all waiting for this together, near and far, in person and in the ether.

I kept up with the tweets and missed my tweet as it rolled by on giant silver screens in the venues (at least one was an IMAX screen, so my name was HUGE). 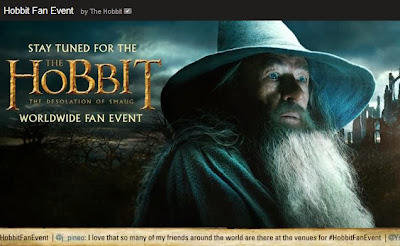 Moments later, I was tweeted at with the news my tweet had been seen by the YouTube crowd. I was disappointed but hoping that I might catch it on a replay later.

Not long after, the live program started. We got to see New York City first, where Orlando Bloom and Richard Armitage (yeah, he was a big reason I was glued to my laptop) were. And when Wellington came on with Jed Brophy and Peter Jackson, I was on the lookout for a Kiwi friend who was glowing like a wee pumpkin in the crowd at the Embassy Theatre. I may have giggled when I saw Rosemarie, because even in the half-light, she was completely noticeable.

I was charmed all over again by the lovely Mr. Armitage, the gracious Mr. Brophy and the genius Sir Peter. In the video blog, I got to see a fellow Mainer, Eric Saindon, who works for Weta and has done so since Lord of the Rings days. It wasn't until after the event was over at the venues that I started hearing from many of my friends that they had seen my Twitter handle on the giant screens in their venue. One poked her sister and told her she knew me from Twitter. Others may have actually squealed when they saw my name.

One has promised to send me the picture she took of the IMAX screen with my name in lights. Yeah, Abby, you better.

And that may be the closest I get to silver screen fame.

On the face of it, it seems no big deal. But the truth is that the entire event was quite the deal.

Imagine the planning that went into making something like this happen, from the theater bookings to the swag bags to the ticket contests to the live streaming from multiple venues.

Then for all of us to come together around the globe to watch this gift to fans from a man who has nurtured these stories of J.R.R. Tolkien into tales that speak across cultures, across languages, across invisible barriers that humans put up when they fail to see we all are more alike than not, well, how is that not quite the deal?

Sure, it was a marketing thing. Sure, it will help make money for the release of the extended edition today.

I, for one, do not care one iota for that. I was already going to buy the movie today. I will see the next installment in December.

What I care about is how I was invited to be a part of something that transcends the ordinary and that gave me a chance to participate in something I love, these stories of Tolkien which speak to a very big part of my heart.

And now, I have that moment when my name scuttled across the screen under a giant picture of Gandalf.

It was a an amazing gathering. And such a terrific gift from someone who didn't have to do anything at all. I think that Sir Peter is just a big ol' fan, just like us.

zomg! Still need to download my photos! I've been doodling a self-portrait of myself unable to look at Mr. Armitage from 10 feet away....

I also watched it from afar and I almost think I enjoyed at as much. (Tweeted, but not the with hashtag that would have gotten my name on screen as I didn't want that -- though it was surreal to see so many tweets of people I "know".)

I found myself thinking, so this is the world we live in now? Fascinating ...

Having worked in media for a while (no, I am not stating my age), I am stunned at the ability we have to almost instantly communicate around the globe and into space. It is brilliant. And I think Sir Peter uses these tools in the way they were meant, bringing us together.

Abby, I love your doodling. I am, however, drumming my fingers. :D

Zan, he definitely is a fan. Started watching the EE extras and his vision is stunning.