Presto! It's a greenhouse 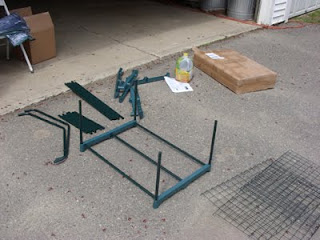 It's official - I have a greenhouse. Granted, it's a pop-up one, but I think it will do the job I need it to do until I can afford (and decide where to put) a solid one.

I started assembling the bits and pieces Saturday afternoon. Above is the start of the pair of shelves that will hold all those lovely flats of seeds. 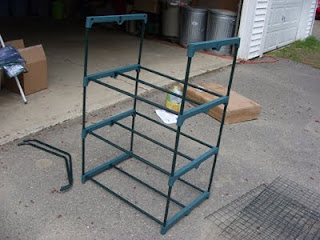 It ended up being quite a bargain for $25 each, plus they come with their own greenhouse covers, which means I can do a microclimate experiment without having to buy the covers separately. But for now, they should work perfectly without. 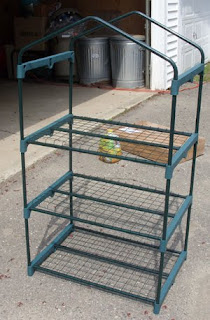 The finished version of the shelves (above) will hold six flats of seeds. Very roomy. 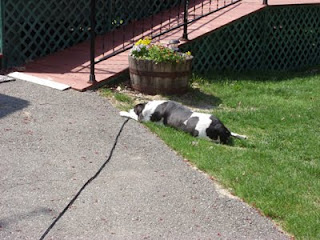 As you can see, the dog was fascinated by my puttering around. He totally ignored me as I rattled the pieces.

I unfolded the potting bench and finally unveiled the greenhouse. My sister helped me get it set up - not the easiest thing in the world, but also not the hardest, although it was one of the steamier jobs I've experienced since it was partly sunny and inside the mostly collapsed structure it was suffocatingly warm - and as we were situating the structure we heard thunder rumble in the distance.

I could just picture the greenhouse blowing away and me hanging on like Mary Poppins, but we managed to pound in the ground stakes and I tied the corners down and got one of the center ties hooked in the back. I didn't do the front because I still needed to put all of the furniture inside. Then we raced to pick up stuff and got in the house before the lightning was too close. Then it rained a bit and that was that for the day. 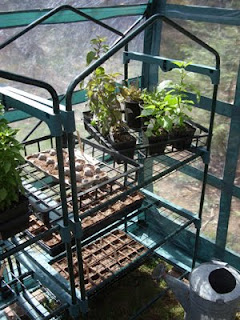 On Sunday, I got the two sets of shelves inside (above) , along with the potting bench (below) and proceeded to set up shop. I had some basil from the nearby greenhouse and some other mail-order plants that had been shipped in mid-April (poor plants). I planted a bunch of seeds, even though it is late. How could I not, now that I can say I have a greenhouse? 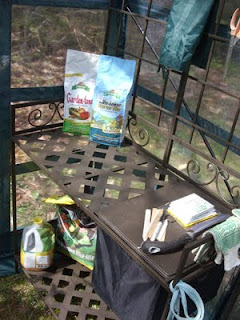 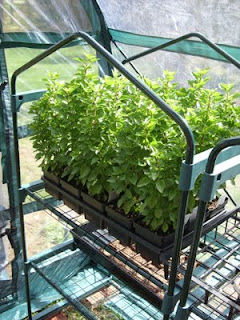 This lovely basil is one of my favorite herbs. It's called columnar basil and should be grown everywhere because it never bolts. I have a stash that means I should have enough to make pesto for long, long time. 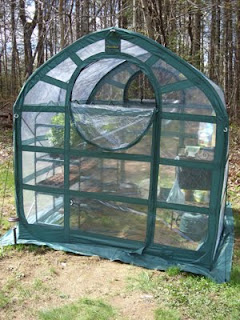 So here it is, the FlowerHouse SpringHouse greenhouse. It is 6x6 feet and 78 inches at the peak. It is surprisingly roomy and man, does it get hot. It was a balmy 80 degrees while I was planting the seeds, but in the morning it was cooking at around 100 before I opened the door and window.

Now let's see what kind of trouble I can get into with this.
Posted by Janine Pineo at 11:28 PM

Email ThisBlogThis!Share to TwitterShare to FacebookShare to Pinterest
Labels: Spring 2011