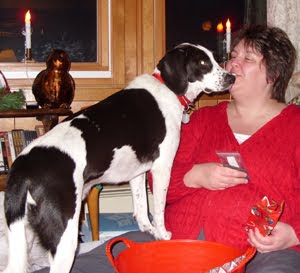 It was a good first Christmas with our boy. He was curious about what we were doing Christmas Eve when we opened our gifts. And I did try to get him to open his gift from his best bud, Cooper, but he just wasn't quite sure what to do.

Instead, he spent time in close proximity to me (in my lap, above) as I opened up some gardening goodies, and then when he wanted to sniff my neck (below); at least he was determined to get in my neck for some reason. 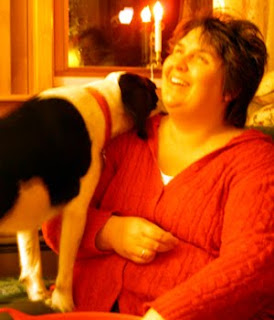 After we finished the gift opening, he jumped into the chair and suddenly attacked me from behind, snuffling my hair and making a general nuisance of himself. He's such a boy! 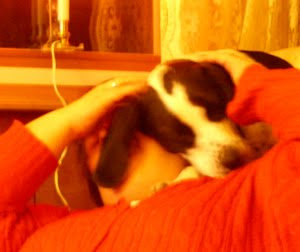 Christmas morn dawned cool and gray, but it only meant our boy was ready to play. Here's Faith throwing snow for Kai. 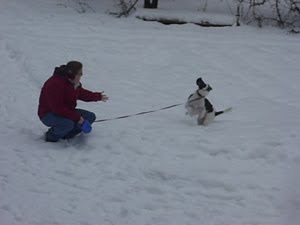 And Kai digging for the thrown snow. 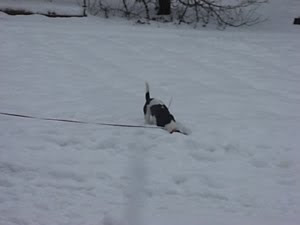 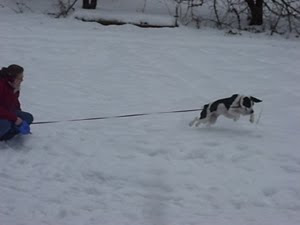 And Kai and Faith continuing on their walk - either that or the boy is flying. NO FEET on the ground. So much energy. 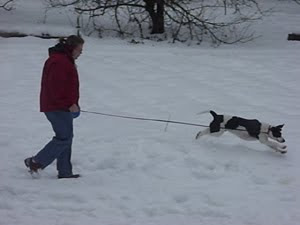 Kai and I later went for our walk at the tree farm. He played hard, leaping and digging, while I watched and applauded and threw snow chunks when things quieted down.

It was a good day.

Happy holidays to Kai's rescue folks. We owe you this joy.
Posted by Janine Pineo at 2:37 AM

Thank you Janine for taking the time out of your holiday to share this wonderful story and pictures with us. As always, its a thrill to get to share in Kai's life experiences.