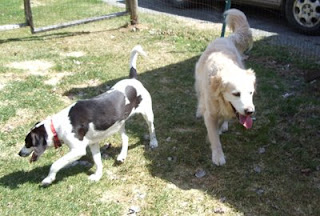 Two weekends' ago, Kai had another play date with his best bud, Cooper, dog of my best friend Jane. The two pooches are a riot to watch, although I seem to bear the brunt of the play with the pair of them vying to jump on my lap.

I've known Coop since he was a pup and he's now about seven. He is still a goofy boy, which works pretty well with goofy Kai. The two of them jump, leap, drool, clack teeth and roll around on the floor together. Cooper even taught Kai how to catch snowballs, something that I had tried to do but it just freaked out Kai to see snow flying at him. Once he saw how much fun Cooper thought it was, Kai was game to do it every time we were outside and the snow was cooperating.

Jane and I plan to take the two on walks at University Forest once Jane's schedule clears, so we tried walking the pair on leash after they had a good romp inside and then out. I am happy to say that we did pretty well, only getting tangled a couple of times when the bloodhound-in-training caught a scent and went scooting across Jane and Cooper's path. I think we both were expecting more trouble from the two loonies, but it didn't materialize.

Here they are running about the play yard. They seem to be in perfect formation, tails up, feet in the same position. Silly boys. 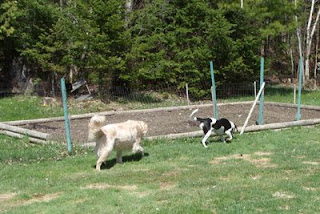